At Oxegen 2011 SSV supplied the video and screens for four stages plus ancillaries adding to 12 screens in total and the onsite video distribution for all sites. Included was an OB facility at three main stages and video content for every stage.

Attendance at Oxegen’s three days of festival was c 80,000. The fourth Stage we were the overall Stage Production Company from Video to PA, lighting, artists, H&S and all aspect of production. 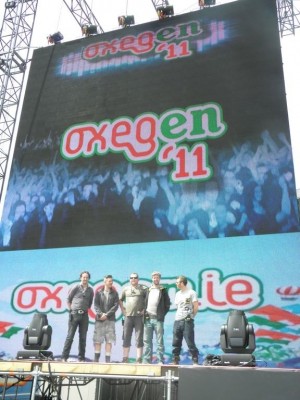 If it’s a big event in Ireland, we’re there. We’re the largest provider of LED screens for major events across the country: over 250 square meters of screens, at over 300 events every year.

We recently handled Oxegen, Ireland’s largest music festival, where 80,000 people heard scores of acts over three days, with headliners including Black Eyed Peas, Foo Fighters, Beyoncé and Coldplay, on the Main Stage. In all, SSV had ten screens across three stages and the campsites.

For many years SSV have financed virtually every element of service with commercials meaning the cost to event is the closest to net zero of any event in Europe. In 2011, SSV even supplied the entire campsite stage package from artists, PA and screens to H&S producing every element f the stage from the Thursday night to the Sunday morning.

We are the only Full-Services provider who deliver such an expansive package including all video, hardware, crewing infrastructure, commercials and production for such a large event.

On either side of the Main Stage, we had LED panels of 81m² — absolutely huge — set in portrait mode, and a 15m² screen in 16:9 at front of house. We’ve been doing more and more with portrait screens, which allow full-height close-ups of performers. Some acts are actually insisting on portrait orientation these days. 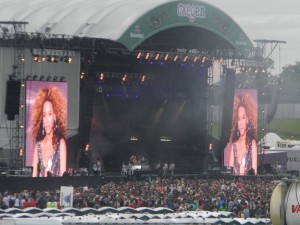 We use these portrait screens in two ways. Earlier acts were shown in 16:9 in the centre of the screens, with logos and info panels filling the upper and lower thirds. Headline acts were shown full height.

Coldplay had the additional specific request to run separate feeds for each screen from their own camera feeds. In fact, many of the performers were already on tour, using their own portable production units (PPU) to provide video backdrops behind the bands in a variety of HD and SD formats. We could then connect these to our feed as well. There was constant change between each performance, depending on what each band wanted.

In the end, the video sources for this event included: the 1080i 10-camera line feed from a TVM OB truck, additional feeds in various formats from bands’ own graphics and PPU, and our Mac-based player system for music, ads, bumpers, and graphics. All of it was passed through a Blackmagic Design Production Switcher. Blackmagic subsequently entered this production as their entry for ‘Best new Innovation’ into the prestigious inAVation Awards.

Over the years our Oxegen experience has led us to believe flexibility is key. Over a 3 day period we handled a multitude of technical and production requests including everything from inserting a “singing fish” video chorus from a video file during a song for The Rubber Bandits to full-scale integration of video elements for the headliners.

We have relayed live pictures of the main stage to VIP, corporate and organiser areas. We made Mobile apps, both iPhone and Android, We have managed Facebook & twitter feeds/channels, screen texting, phone apps and we have shot and edited numerous video inserts over the years for both screens and webpages. In 2006 and 2010, Oxegen coincided with the finals of the world cup. We handled live feed, offset feeds and feeds to the VIP and campsite areas over 2km from source.

Every stage has it’s own challenges and we have solutions for all of them, from the compact requirements of the Greenspheres stage contained within a marquee; the need to incorporate specific branding needs of stage sponsors on the 2nd stage; producing an entire stage and screen entertainment at the campsite big screen; providing video and graphic based information screens at key areas; providing everything from small to big screens for the VIP and backstage areas through to integrated live video production with headline acts for 80,000 people on the main stage.

Uniquely in the Av business, for the fourth/ OXBOX Stage we were the overall Event Production Company from Video to PA, lighting, artists, H&S and all aspect of production for a stage that was live from 2pm to 4am on all four days of the festival camping. We also handled all commercials so the stage came with minimal charge to client. All of this is a precursor to the TOTEM stage concept in our Festival Fresh presentation in media downloads.

We worked hand-in-hand with event sponsors to ensure their branding, activation and integration was maximized for impact, working tm ensure that the Promoters even also engaged as much as possible and all hoped-for event enhancements were delivered.

One of the key elements of LED screens at Oxegen has been crowd safety. We work closely with the organisers and generate a range of graphics for crowd control and general information from “now and next” to exiting information and crowd flow messages.

Logistically we begin planning for this event months in advance. We pack two to three articulated containers full of AV and LED equipment and bring them on site for a week long build. Between the 3 separate stages we build 9 LED screens fed from 3 independent control rooms installed on site. It takes over 24 cameras in 3 OB trucks to provide live pictures to the screens. We roll out over 10km of Video, Audio and Fibre Optic cable to connect it all together. We employ a crew of over 35 staff to manage the AV and screens. It’s a bit like building a TV station for a weekend and taking it apart again on Monday morning.

Take a look at just some of the improvements to service we have planned this year with the attached Festival Fresh Presentation, and always remember, we are very open to any new innovations that enhance your event.